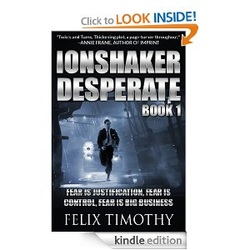 Trey's wife, his wife's shrink and his attorney are shot dead. His ex-girlfriend narrowly escapes death, gets admitted in ICU in critical condition, but mysteriously disappears from the hospital just a few hours after being admitted. The four of them are connected to Trey.


Brett (the lead FBI detective) pursues Trey (now the sole murder suspect), finds himself framed for two new other murders, becomes a wanted man and starts running like Trey, after learning that it’s not Trey but Al Fakir (an Al Qaeda splinter group) that is killing anyone with the knowledge that Al Fakir has stolen Ionshaker (a cutting edge universal nuclear management device).

Al Fakir's intention with Ionshaker is not very clear but it is obvious that the country that possesses Ionshaker possesses all world nuclear power on its finger tips because the device can control any nuke on earth. It is suspected that either Iran, Germany, China, Russia or Pakistan could be behind Ionshaker's disappearance and in the event that Ionshaker actually leaves American soil, then the U.S automatically loses its dominance, security and stability. Worse still, if Al Fakir's imagination is to detonate American nukes, then their best imagination will be America’s worst nightmare.


In response, the President sanctions a covert mission led by the only two people that can stop Al Fakir: Trey (an ex CIA) and Brett (now ex FBI) to repossess Ionshaker from Al Fakir before the device leaves the country. Before things get better, they will first get worse as people will die, scandals will be exposed, and America will be desperate. The mission is called Ionshaker Desperate.